We are not Trayvon

The world is full of people who want to understand. The woman who wrote what follows is one of them. I tried but could not find her name, though she did post her picture with her story on a Tumblr called We Are Not Trayvon Martin. I wanted to thank her for telling a truth that some refuse to acknowledge. She tells it powerfully. 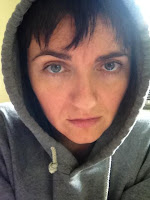 Growing up White in America, I’ve spent my life watching cops’ shoulders tense as I turn the corner, then release as they see my skin. Have watched recruiters at job fairs look right through my Black classmates, as if they simply were not there. I’ve even had to go into the store to buy my step-cousins their candy and soda because the owner wouldn’t sell to “those people." This same shop owner asked me what a nice little girl like me was doing hanging around with them. “Them"? Those people were my cousins, my friends, my family, my world. All he saw was “trouble." This was in 1986.

Just this spring, I was shaken by sounds of yelling outside my window - “Get down on the ground! DOWN ON THE GROUND OR WE’LL SHOOT!" I stuck my head through the curtains to see more than ten NYPD officers in my back yard, surrounding a Black man with his face in the dirt. “He’s got a gun - HE’S GOT A GUN!" they screamed, as he tried to respond “I’m unarmed! No gun! Please don’t shoot! Please! Don’t shoot!"

Terrified I was about to witness this man’s death, I did the only thing I knew I could do - opened my back door and stepped outside. The second they saw my white face, every single one of those officers withdrew his gun and gasped. They had a White witness - now they had to think about how this looked.

Those officers were more worried about disturbing me than they were about killing an unarmed man. I watched as they searched through piles of leaves for the nonexistent gun, fearful to look me in the eye. Because I am White, I stood in my doorway and stared as they searched. There was no gun. They never thought there was a gun. They knew it and I knew it. And I wanted them to know I knew.

Trayvon could have been my godson, my nephew, or my student. But he most certainly could not have been me. And unlike that day in my yard, this time, I’m stuck just watching as Zimmerman pulls the trigger - and gets away with it. Stuck watching as they take a life they don’t think anyone that “matters" will miss. And I weep. Rest in peace, Trayvon. We miss you.