I'm having trouble writing about Ferguson and the death by cop of Michael Brown, an unarmed young black man who was jaywalking. I am having trouble immersing myself in the details enough to write about them, because the whole thing is so distressing and commonplace that I can't even take it all in. At this moment, Ferguson, Missouri is burning, and journalists have been told at police gunpoint to stay behind a taped off area. There are tanks in the street and more people have been shot, at least one of them killed, and dogs and tear gas have been unleashed. The whole thing is a tinder box that has blown the fuck up.

I'm incensed that CNN reported this morning that Darren Wilson, the white cop who shot the black kid, is said to be "a good guy" by his friends, meanwhile the Ferguson police force is trying to paint the victim as a career criminal who might have reached across a grocery store counter and took something. The store video's not really clear and it's irrelevant anyway. The cop didn't know anything about that when he pumped six bullets into 18-year-old Michael Brown, two in the head, as the kid stood with his hands in the air begging him not to shoot, according to witnesses. The kid was two days away from starting college. I'm sure his friends thought he was "a good guy," too.

Check out this piece from Huffpo comparing how news headlines describe white killers compared to black victims. Here's an example: 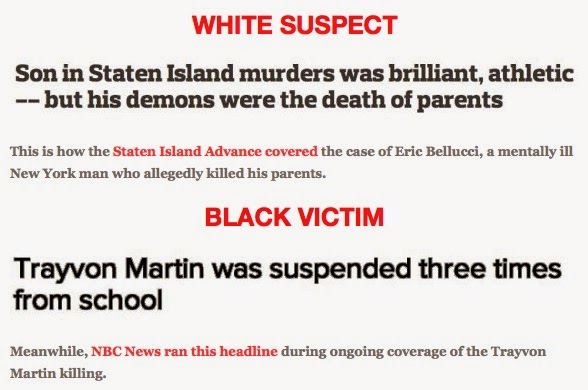 What are they really saying? That unarmed Trayvon Martin deserved to be shot and killed while walking home from the store because he'd been suspended three times from school? And here's another more recent example: 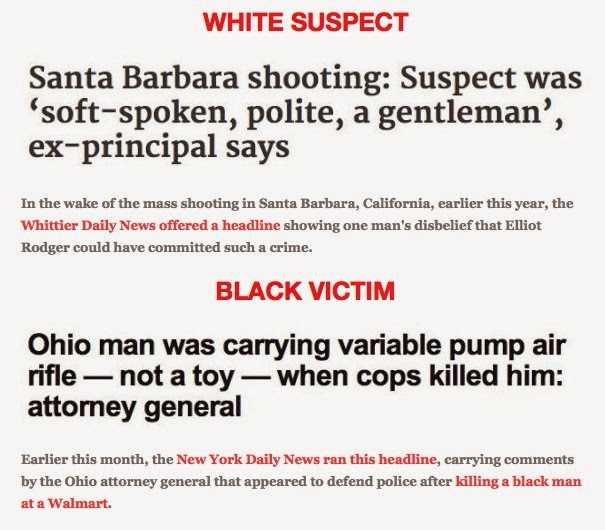 The black man in the second headline, by the way, was a shopper in a Beavercreek, Ohio Wal-Mart who was holding a BB gun on sale by the store. John Crawford III had taken the air rifle from the shelf when he was accosted by police and fatally shot. Despite rallies calling for the release of the store video, police have refused to allow it to be viewed.

I'll leave you with this quote from James Baldwin because he manages to say everything there is to be said today even though he wrote these words decades ago. Has so little changed?

“It began to seem that one would have to hold in the mind forever two ideas which seemed to be in opposition. The first idea was acceptance, the acceptance, totally without rancor, of life as it is, and men as they are: in the light of this idea, it goes without saying that injustice is a commonplace. But this did not mean that one could be complacent, for the second idea was of equal power: that one must never, in one's own life, accept these injustices as commonplace but must fight them with all one's strength. This fight begins, however, in the heart and it now had been laid to my charge to keep my own heart free of hatred and despair. This intimation made my heart heavy...”