Aunt Beryl, you were the sweetest soul

Today would have been my mother Gloria's 95th birthday. This morning, one of her dearest friends in this world closed her eyes for good. Aunt Beryl and her husband Uncle Clinton, who later became my brother's first in laws, lived down the street from us on Paddington Terrace when we were growing up. Our families were close, and in fact, Uncle Clinton gave the eulogy at my own father's funeral in 1996, and my husband and I stayed in their home. Their daughter Hilary is one of my dearest friends in this world. Our sisterly bond was forged in our teens and easily survived her later divorce from my brother, and her relocation to Germany, where she now lives with the love her life.

Aunt Beryl, age 87, died at 8 AM this morning, after months of her body slowly shutting down. I like to believe that on this day, of all days, my mom came to meet her friend, and welcome her home. I just spoke to Norman, my birthday mate, and one of Beryl and Clinton's two sons. He said his dad doesn't yet know his mom is gone. Since last I saw Uncle Clinton, the fog of Alzheimer's has claimed him, and his children aren't quite sure how to break the news to him that his life's great love is gone. 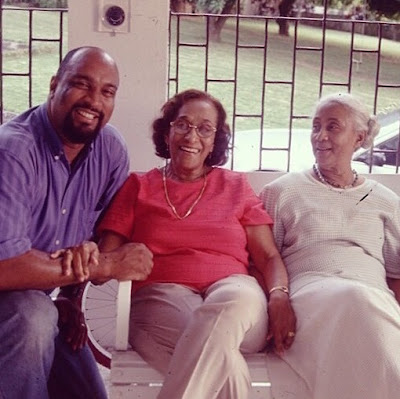 That is my husband, with my mom (center) and Aunt Beryl (on the right) in one of my favorite photographs ever. I sent this and other photos to Aunt Beryl and Uncle Clinton on the occasion of their 60th anniversary in June 2014. How can I explain what she means to me, how deep this loss feels. I will just post for posterity the letter I wrote to her and Uncle Clinton, and the one I got in return. It only begins to capture their place in my life, because those years on Paddington Terrace were absolutely formative.


On this, your 60th anniversary of marriage, I just wanted to let you know how very much you both mean to me, and what a large and wonderful imprint you have left on our lives.

How blessed our family was when we moved to number 37 Paddington Terrace in my fourteenth year, only to discover that you lived just down the street. What a gift it was to wander barefoot into your home, always sure of welcome, to be able to sit huddled with Hilary in her room giggling over our teenage journals, to play ping pong with Norman (my birthday mate!) and Robert and Derek and Huey, and to be greeted in all these endeavors by your great warmth and kind and loving oversight.

Those years on Paddington Terrace were the sweetest anyone could imagine, and this was in no small part because of you both. You cannot know the depth of love I hold for your family; and Rad has since come to love you as much too. (Not to mention, Uncle Clinton, he thinks Aunt Beryl is one of the most beautiful women he has ever seen! Don't tell him I told you!)

I wanted to share with you some photos we took when last we were in Jamaica at your home. They are photos of the two of you, so beautiful and bonded, such a glorious love, and of Hilary, Robert and me, one fraction of the old Paddington Terrace crew. And there is one more photo of older vintage, of Aunt Beryl, my mom Gloria, and Rad, a photo that Rad says is with two of his favorite ladies.

May God continue to richly bless you both on this wonderful anniversary, and may we all learn from your great grace and wisdom and goodness unerringly displayed throughout these full 60 years. May you celebrate many more such milestones together, and continue to be a shining example for us all.

We love you so much. Thank you for being a part of our lives.

And from her iPad, Aunt Beryl replied:

Thank you for your lovely letter on our anniversary. It warmed our hearts and certainly contributed to our having a contented day. You were all our children and it is good to know that we are remembered with affection. We love you all still and wish the best for you and your children. Lots of love from Uncle Clinton and Aunt Beryl 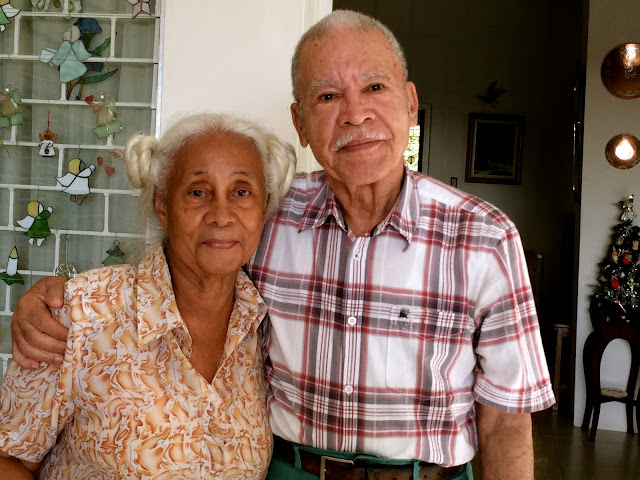 There they are, still hale and hearty in 2014. Below is the old Paddington Terrace crew on a beach-going day in the summer of 1975. I moved from Kingston, Jamaica to New York City for college two months after this photograph was taken. That's me with the Afro in the middle and Hilary to my left, arm linked with mine. Truly, these days were charmed, and Aunt Beryl and Uncle Clinton helped make it so. 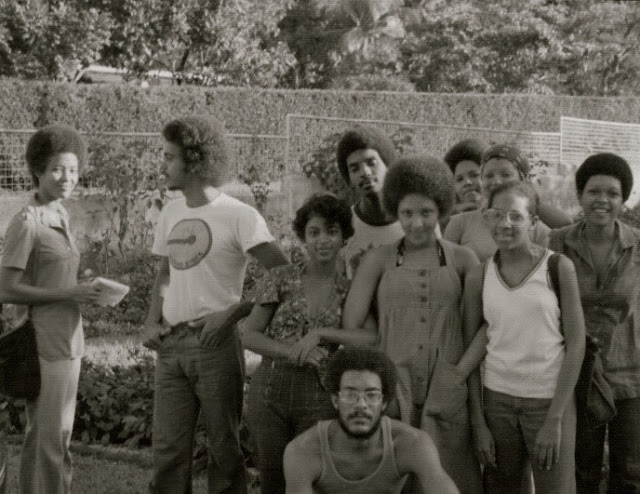