There is so much going on my head is spinning. I don't know how to report on it. I'm exhausted just from trying to keep up. Elizabeth just wrote on Facebook: "It took nine days to break nearly everything this country stands for." That just about sums up where things stand.

Thank God for the ACLU and the two women judges who last night managed to put a stay on Trump/Bannon's excutive order banning Muslims from seven countries. It is worth noting that none of the seven countries on the list have been implicated in a single action of terrorism against the United States.

Muslim countries with which Trump does business, like Saudi Arabia (from which 15 of the 19 hijackers on 9/11 hailed) were not included in the ban.

Nor was there any ban on white males from Charleston, North Carolina, or Newtown, Connecticut. Thought I'd throw that in.

Travelers from the seven countries holding valid green cards were included in the ban, and were not allowed to re-enter the United States until the stay was issued last night. By then, many passengers had been put on planes back to where they traveled from.

At airports across the country, people gathered to protest the fascist order. In New York City, someone drove a van with several little girls in hijabs out to the airport so they could see that they were supported, it was not all hate.

At dinner last night, before the courts challenged the constitutionality of the Muslim ban, I said to my friend, "People keep marching yet Trump keeps issuing these insane executive orders and no one who can seems willing to stop him." She said, "It is important for us to gather and show the world that we don't agree with those orders." She's so right.

When I got home my cousin called me from DC with the news that the ACLU had brought suit and a judge had put a halt on Trump/Bannon's Muslim ban. She said, "We're fighting! Oh, I'm so happy, we're fighting!"

There is so much to fight at every turn. This morning I learned that while people marched yesterday, Trump installed Bannon, the unelected white nationalist, to a permanent seat on the National Security Council. With the same executive order he removed from the council the nation's top intelligence person and top military person, relegating them to "invite only" status. We did not vote for Bannon and yet he seems to be running the president like a wind-up toy.

I'm exhausted, but by no means down for the count. 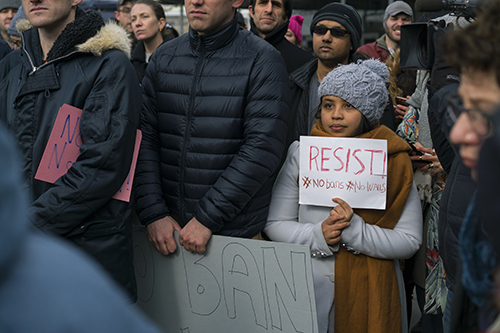