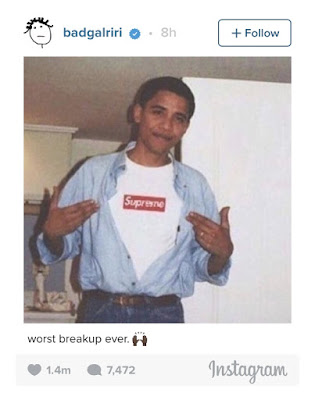 Social media used to be social. A place where we shared our lives in quirky, funny, sentimental ways. Now social media is the place where people scream, begging others to wake up to the danger of the authoritarian state that, in one short week since the departure of the grown up, has become our new reality. The flood of executive orders flying out of the White House is surreal. As he signs each one, the new president is smug in the way of a grade schooler relishing the havoc he is causing.  Look what I can do, his expression says. Fuckyoufuckyoufuckyou.

The people who surround him are even scarier than he is. We can see him coming, see his crazy writ large, but Pence, Kushner, Bannon, Sessions, Flynn, they will come around the corner and quietly gut you with nothing but a flicker of self-satisfaction in their eyes. Hoping for Trump to exit stage left means we will have to deal with Pence, who is every bit as dangerous in his way. Don't think he and the rest of them haven't been winding up Donald like a toy and setting him on spin, and he's just too stupid to see or care.

The Washington Post reported yesterday that the entire senior management staff of the state department resigned (or were fired). Meanwhile a judge ruled that Melania Trump can sue a blogger who reported rumors circulating about her during the campaign. Also yesterday, the president's senior advisor Bannon told the New York Times that the media is "the opposition" and they should "shut their mouths." I can only assume this was not fake news.

At breakfast this morning, as I birddogged an electrical issue at my mom's house in St. Luica, which is currently rented, I said to my husband, "At least if we have to get away fast we have a place to go." We both fell silent then, stunned by the fact that we weren't really joking.