My cousin told me this morning that their father told Aunt Beulah last night that he released her, and that it was okay for her to go. She said a Jamaican nurse at the hospice told him he needed to do that, or she would keep hanging on.

Aunt Beulah, my mom's second youngest sister, has been unresponsive for weeks now, and everyone expected when they took her off the ventilator on Monday she would not last much longer. Instead she made it to the hospice, where she has been resting all week in an airy room large enough for her husband and three daughters to stay over every night if they choose to. She has opened her eyes occasionally, but mostly she sleeps, traveling, as we say, between the worlds. She seems peaceful, and it has also been healing for her daughters to be able to spend this week at her bedside, watching her rest without the tangle of tubes and IVs and wires and beeps, all the intrusive machinery of dying.

My cousin believes her mother heard what their father said. She said her mother's breath is slower and shallower this morning. I think it must be a blessed thing at the end of life to let go with all the people you love best around you, loving you back. 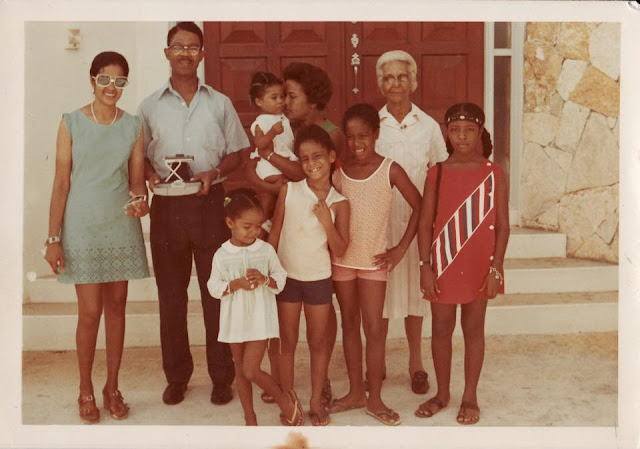 That's Aunt Beulah, back row center, loving on one of her babies. Her other two daughters are the uber cool one in the red dress, and the tiny one front row left. They are outside their home in the Bahamas, where my cousins grew up, before they all moved stateside. The eldest now lives in New York City, the middle one in Boston, and the youngest in San Francisco, but they are all in Ft. Pierce, Florida with their parents these last weeks, keeping the final vigil.

We were talking about Aunt Beulah when we gathered for our anniversary a couple nights ago, all of us aware that she is close to the end. She and Uncle Quin were with us for Thanksgiving last year, along with their three daughters and two grandchildren. I'm so grateful for that now. Aunt Beulah was in good spirits, telling us all again and again that she and Uncle Quin had been married 60 years. It was for her the salient fact of her life on a night when everyone was giving thanks.

She didn't always recognize us, as she has suffered from Alzheimer's for the past few years. But, as we were saying two nights ago, even when she didn't remember your name, or who you were connected to, she knew she loved you. The love just beamed out of her, so that the vivid transparent green of her eyes lit up with it. I am remembering the remarkable color and warmth of Aunt Beulah's eyes as I sit here, waiting for news.