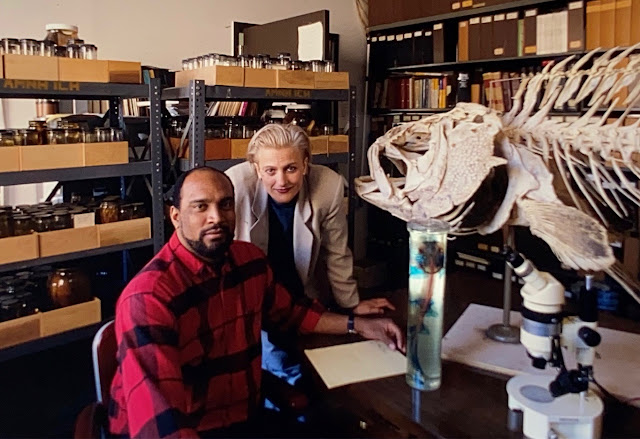 As part working remotely, my husband has been doing these Scientists At Home online presentations for the Department of Ichthyology at his museum. He has to put together slides that show the collection, and the curators and scientists at work, and so he's been scouring his photo archives for images he's taken or acquired of specimens and field expeditions over the years. He did a particularly memorable biodiversity expedition in Vietnam over the course of four summers, spending a month in the field with teams of scientists from many different disciplines each time. He slept in tents and hammocks strung from trees, filtered his drinking water from streams, cast fish nets in mountain rivers, and was the biggest human and only black man most of the people in the mountain villages they passed through had ever seen.

The villagers would dress themselves and their children in their Sunday best and bring them out to pose with the big, black, bearded giant who came through. My husband was good humored about it all. One night, his hiking boots, left out beside his tent, disappeared. Fortunately he had a pair of Tevas with him as well. He surmises that people in that remote part of the country simply didn't believe a man's feet could be quite so big and took his footwear as proof. There is also a harrowing story of a local village leader insisting that the scientists drink three-snake wine as part of a welcome ritual. My husband thinks he was messing with them, that there was no such tradition, and he was merely trying to get them shitfaced so he and his friends could have a good laugh at their antics. If so, he succeeded. My man slipped out of the tent after a couple of rounds, but remembers the world swirling at him that night, in that place where only the stars gave light.

When my man was in the field, my mother usually came to stay with me to help out with the kids while I went to work. She prayed assiduously morning and night for his safety in a place where the unexploded munitions of war still pocked the landscape. I was still young and foolish then, my mother's dark sense of the dangers that could befall one's children not yet fully developed, so believe it or not, it never occurred to me to worry about his safety. Let me tell you, that mother worry muscle is a champion now.

Our son was four the first year of the project, and our daughter was two. Many years later our son said, "Daddy, remember that time when you spent a year in Vietnam?" Oh yes, he was missed. Recently, his explorations turned up the photo above. That's my husband, the ichthyologist, aka "fish man," and one of the curators, with some of the department's specimens. The photo was taken some twenty years ago now, around the time he was doing that biodiversity study, during a month that in our child's mind lasted a year. 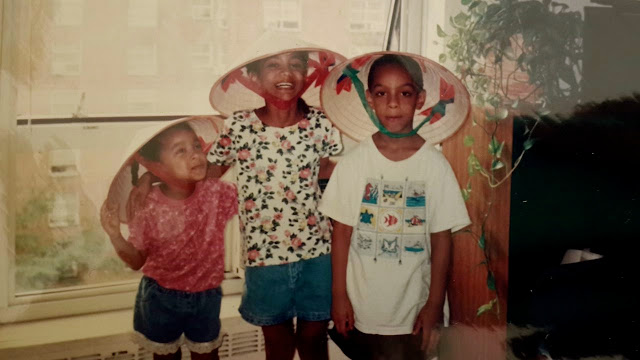 He brought back conical palm leaf hats for the kids, including our niece from Jamaica, who usually spent the summer with us in New York. The kids are eight, six, and four here.