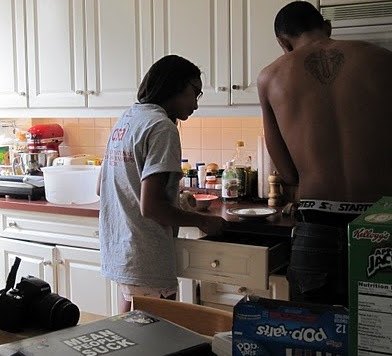 On Sunday morning my son made decently poached eggs on the first try, then my daughter styled them with black pepper and chopped parsley. My niece, the pre-dentistry major, was in the background cheering them on, assuring them that these dishes would be on the menu of her restaurant when she opens it.

Then my daughter had to leave for test prep, and as she was headed to the door, my son wanted to know where the vanilla was for the French toast he was making. She stopped and rummaged in the cabinets and pulled out a small bottle and threw it to him. It turned out to be red food coloring, which he only discovered after he added it to the egg mixture. So then he found the vanilla, the bottle for which really did look just like the food coloring bottle, and he proceeded with his recipe while in the background my niece declared, "Epic! Red velvet French toast! Yes! We'll call it The Radford."
After this delicious breakfast we all settled in for an afternoon movie. Amid the meandering chatter that attended the selection of the movie 127 Hours, my son's friend complained that at school he never sleeps. "Like last Thursday, he was up having a water fight with his roommate at 2 a.m." She turned to my son, hand on hip. "Am I lying?"

My son then jumped up from the couch where he had been comfortably reclined since finishing his turn in the kitchen and launched into a fond rememberance of said water fight, which involved both young men dumping the contents of water bottles over each other's sheets and finally stripping the beds and heading to the laundry room to dry the soaked sheets, then dousing those dryer-warm sheets some more. We can imagine the hilarity and wrestling and laughter and shouts that accompanied this engagement.

And they live in the "quiet dorm."
"Fortunately, I can sleep on a bare mattress," my son finished with an unmistakable note of triumph.
"You need to take vitamins," I said. This was not the non-sequitur that it seemed. I figured if he was torching the candle from all sides, with classes and track and studying and parties and soccer and late night water fights, he might as well shore up his resistance.
"I don't need vitamins," my boy declared with the generous authority of a 19-year-old who is absolutely certain of what he knows and is now going to share it with you. "In America we get all the nutrients we need from our diet yet we swallow supplements by the handful, which is why we have the most expensive pee in the world. And," he added, finger stabbing the air for emphasis, "we get those nutrients even on a whack diet like mine."
I took the bait. "Which is what exactly?"
"Ramen noodles, pop tarts and oatmeal."
"Glad the oatmeal is in there," I said.
"Yeah, that's my main staple," he said, falling back onto the couch and picking up the TV remote. "That's my can't-be-bothered-to-go-to-the-dining-hall for breakfast, lunch and dinner meal."

Good to know what our room and board payments to his college are subsidizing.
And yet, on Sunday morning he made poached eggs and red velvet French toast for the whole family, and on Sunday night he treated us all to dinner of Brazilian braised chicken, garlic broccoli and saffron rice with black beans. Clearly, he's learning to feed himself more than oatmeal.
Truth is, I'm just happy to see him and his sister and his cousin and his friends smug and snug on my couch. They'll all be out in the world making their way soon enough.
Posted by 37paddington at 1:30 PM