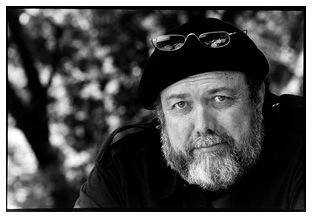 Brian Lanker, the Pulitzer-Prize winning photographer, died this week. He was only 63 years old. I worked with him back in the days when I was a footloose reporter in my twenties jumping on planes at a moment's notice for Life magazine.

We worked on several stories together in the eighties, including a particularly memorable one on American hermits. We hiked into the most remote locations to find our subjects, and slept on the hard ground or, when the night got too cold, in the back of a small jeep. He took a photo of me pulling in my canoe in the North Woods Lake Country of Minnesota, where we spent three days with Knife Lake Dorothy after canoeing across seven lakes and carrying our canoes on our backs through the intervening portages. I have that picture hanging on my wall. On Monday, when I heard Brian had died after being diagnosed with pancreatic cancer just 10 days before, I stood before that picture, and I understood for the first time how people look back on an earlier time and it can seem like another life, almost as if it was lived by someone else.

I felt sad that I didn't keep in touch with Brian after I left Life. He was the sort of large-hearted man who would have been easy to stay connected to, but I got so caught up in the raising of my children, my large extended family, the workaday grind, I let that era slip away from me.

Brian was a force of nature, a photographer who was so genuinely curious about his subjects, and so gentle and perceptive in the way he asked questions that he often helped us young reporters do our job at greater depth than we might have managed otherwise. Most photographers I worked with back then were only interested in the photograph, the interplay of light and shadow, the composition and the angles, and we reporters knew how to stay in the background so as to disturb as little as possible the scene within the lens. We knew how to watch and gather rich details of character just from the observing, and how to circle back later for the rest of the story. Brian was different. For him, the words were as important as the photographs. The words informed his photographs. He showed such intoxicating interest in his subjects that they just unfolded before him and gave everything to his camera.

Brian met his wife on assignment. When he was just starting out in the early seventies, he proposed and then photographed a story on a couple giving birth. It was his photograph of the just-born infant on her mother's abdomen, "Moment of Life," that won him the Pulitzer in 1973. 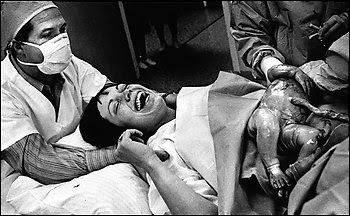 Brian kept in touch with the couple, even taking them with him to the Pulitzer ceremony. The couple later divorced, and Brian and the woman fell in love. They married and lived in Eugene, Orgeon with their two daughters and a son. Brian was such an adoring father. He talked about his children constantly in ways that left me feeling as if I knew them a little. Those children are now grown. Two of them were to be married in the fall. When they all understood that Brian would likely not be make it to the summer, they moved their weddings up to last weekend. His daughter was married on Friday, and his son on Saturday in the family home. Two days later, their father died.

He went so fast. Ten days. He was on assignment in Los Angeles and started feeling unwell. He came home and went to the doctor. By the time it was found, his cancer was at such an advanced stage nothing could be done, they said. I read that when he realized he was dying, Brian whispered, "There's just so much left to do." And now he is gone. I am honored to have worked with him. His loss makes me want to reach out to others from that time who live in my heart still, but who may not even realize how much larger and richer they made my life. I need to tell them while there is time. 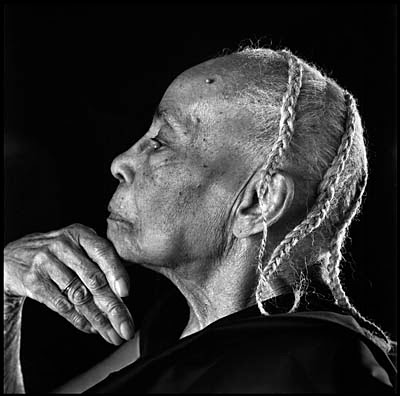 The photograph above of civil rights activist Septima Clark is one of Brian's most famous. It graced the cover of his best-selling book, I Dream a World: Portraits of Black Women Who Changed America. "I have great belief in the fact that whenever there is chaos, it creates wonderful thinking," Ms. Clark said. "I consider chaos a gift."

Brian knew how to open the way for such sharing, and knew how to let it in, too. Once, he spoke to an audience about what moved him to do this book. “When I started," he said, "I thought these women would be great role models for my daughters. By the time it was finished, I realized that they were also great role models for my son. For what distinguished them was not their gender but their character, and the lessons to be learned from their lives are a living example to us all.”

Update on March 18, 2011:
I found this editorial about Brian Lanker at Register-Guard.com, the website for the newspaper in Eugene, Oregon where he made his name after leaving his native Topeka, Kansas. I share it here because it offers a deep and true glimpse of the artist at work—and of the man:
In 1989, Lanker collaborated with poet Maya Angelou on a book, I Dream a World: Portraits of Black Women Who Changed America. It became one of the most successful photography books of all time, currently in its 14th printing with more than half a million copies sold.
Every photo in that book is remarkable, but one image stands out for its elegance and place on the book’s cover—a portrait of 89-year-old Septima Poinsette Clark, the “queen mother” of the civil rights movement.
The logistics of getting that photograph were formidable. Lanker had to wait for days in a motel room in Jones Island, S.C., to interview Clark, who had suffered a stroke and was in a wheelchair in a nursing home.
In a 1991 interview with close friend and former Register-Guard sports editor Blaine Newnham, Lanker recalled the challenges: “How do you take someone in a nursing home, in a wheelchair and on oxygen, and give her the dignity and the strength her life embodied? It transcends the reality of the circumstances I had to work with.”
Lanker finally met Clark and arranged to take her picture the next day. Because one side of her face was paralyzed, he decided to profile the other. When a well-meaning attendant put her hair in a bun, Lanker waited for her regal cornrows to be let down. Eventually, Lanker had 15 minutes in which Clark was able to sit in her wheelchair without oxygen.
“I asked her to bring a hand to her face,” Lanker recalled, “and she did so in a most majestic and unusual way. I made that photograph, and it was the only one like it.”
Posted by 37paddington at 6:56 PM