She was talking to her dead brother Percy

It's been a heartrending week for my 92-year-old aunt. She fell again last week Wednesday. The home attendant who was in the home that day is an increasingly impatient woman who may not be the right person to handle my aunt's declining mental and physical condition. She is inclined to rush my aunt through everything, dressing and undressing, feeding and grooming, and my aunt does not like to be rushed. She will be sweetly compliant if coaxed, but if you try to push her she will fight you, flailing her arms and striking out and pushing back, her face crumpling into angry tears.

We've known for a while it wasn't working, but were loath to make a change. This woman is well-intentioned, and Lord knows, she weathered all those months of my addicted cousin's craziness when she was living in the house with my aunt, and we felt some loyalty and gratitude for that. But last week, when my aunt fell again during her evening routine, the home attendant called 911, took her to the hospital and then didn't let any responsible family member know she was there. She didn't even call the home care agency. She just went home. Maybe she was exhausted. Maybe exasperated. In any case we didn't realize until the next morning when the Thursday home attendant arrived that Aunt Winnie was in the hospital.

I had gone to work early for a meeting. I came out of the meeting at noon and there were missed calls on my cell phone from three of my aunts and my mother, one from the home attendant, one from the hospital's geriatric social worker, and one from Aunt Winnie's son. My heart clenched. I knew this could not be good. I started returning the calls and quickly learned that my cousin, the still-active alcoholic and addict who was removed from my aunt's home via a restraining order last fall, had called the night before and been told that her mother was on her way to the hospital. Apparently she showed up there at 7 a.m. on Thursday morning and had been sitting with her mother ever since.

I was touched by this. I thought it a poignant expression of her love for her mother, in spite of everything. Actually, I romanticized it a bit. No, a lot. But when I arrived at the hospital soon after, reality smacked me in the face. My cousin and her brother were standing on opposite sides of their mother's bed, screaming at each other. A large man was in the room, trying to calm them. I learned he was the head of security, who had been called by the troubled social workers, two small women with clipboards who I now saw standing off to one side, looking hunched and worried. Everyone turned to me as I walked in, as if I had arrived to save the day. I wanted to laugh and cry at the same time.

I didn't even bother to be embarrassed by how my cousins were behaving. It was really way beyond that. My aunt was in the bed crying and saying something no one could understand. Her daughter was crying and yelling slurred obscenities at her brother, who now fell silent. I realized at once that my cousin was sloshed. She was neatly dressed but she reeked of alchohol, she couldn't control her volume, and there were big dark moons around both her eyes that I had never seen there before.

My first impulse was to try and calm her down. I thought everything would simmer down if I could do that. So I hugged her and kissed her and whispered in her ear, "Hush, you're making your mother cry." It didn't work. She screamed that her brother was the cause of her mother's tears and that she had been to court and overturned his restraining order and had filed her own restraining order against him. A nurse came out of the adjoining room and shushed her. The security director kept trying to talk to me and usher us all out the room. He wanted to know could we just ban the daughter from visiting. As my aunt's power of attorney, would I be willing to consent to that.

Things got kind of loony from there. My cousin started thrusting sheets of crumpled paper at her brother, slurring loudly that she was serving him with an order of protection. He just looked at them and didn't take them. He was slack-faced and untidily dressed, as if he had rushed out of his home without any sort of care. I felt so deeply sad for both of them, and for my aunt, whose last days have been so marred by the ugliness between her children.

We finally left my aunt's room and went down the hall to a supply room. My cousin, the intoxicated one, refused to come into the room, shrilling that she would not go into any room where her brother was. So we stood at the doorway and tried to talk to her, but she was much too high to be reasonable about anything. Finally, I asked her to leave and to call me or one of our other cousins when she was sober. I said we would bring her to see her mother if she was sober. She replied with a string of expletives and stalked off down the corridor to the elevators, loud and wrong. For the five days my aunt was in the hospital, she didn't return. Or perhaps she did and security declined to allow her in.

My aunt came home from the hospital last night. She now has a new home attendant, another Jamaican woman. This one has a gentle soothing way about her. The agency probably chose her for this case because she is fresh from working with another elderly patient for ten years, a woman who passed away last month at the age of one hundred and three. This home attendant seems well versed in how to handle my aunt's increasing incapacitation. And indeed, my aunt has stepped down a lot since last week, so much so that I wonder if she has quietly suffered a stroke. When the visiting nurse service came to enroll her in physical therapy earlier today, the new home attendant told them she would need a hospital bed, that she wasn't able to sit up on her own. The bed will be brought in this week. I know my aunt needs it, but my heart sank anyway, because I think that once she gets into that bed, she will no longer sit in her recliner. She will now be officially bed bound.

When I was there last night, she was curled up on her regular bed, asleep. I kissed her head, hoping she would wake up and she did. But she was different than she was even a week ago. Then, she would turn and look at me when I came in, and even if she said nothing, a light would flicker in her eyes. I realize now it was a smile, a greeting that conveyed she was happy to see me. I only understand the depth of this communication in its absence. Last night, she looked up at me blankly, nothing stirring in her eyes, and my throat felt full of sudden tears. My daughter was with me so I didn't cry. I didn't want everything sad.  We sat there and talked to her, and she tried to say something and I heard only one thing clearly. "Percy." She said his name twice. Percy was her oldest brother, the first one of her eight brothers and sisters to die. "Did you talk to Percy?" I asked her. "Oh yes," she said. I asked where she saw him, whether in a dream or in the room with her, but I couldn't understand her response.

After a while I coaxed her to go back to sleep and told her I would come back tomorrow. I kissed her, and my daughter kissed her, and at that point there was something in her eyes, a flicker of something trying to swim up to the surface of her pupils, and even though it didn't quite make it, I knew she was trying to show love. 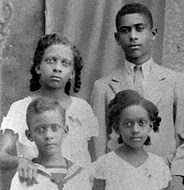 My Aunt Winnie at 12 years is the girl on the left. Uncle Percy, 14 years, is on her right. The two children in the front are my Uncle Terrence, 8, and my mom, age 9. This is a crop from a family photo taken 80 years ago next month.