Hey, talk show pundits, lay off Richard Blanco and his inauguration poem. Who are you to say it wasn't a poem, just a piece of prose with line breaks. It's his poem. It's not really on you to judge its form or content, or even whether it's a good poem or not. All that is really yours to do is to decide your response to it. Whether you liked it or not is of course entirely your prerogative. But that is all. Me? I enjoyed the poem, the ideas especially.

I'm thinking this morning about the poetry group that my daughter and her five best friends were part of for five years, lasting into high school. Their so called Writer's Workshop started as an after school class in sixth grade and evolved into a poetry group meeting in their teacher's artsy-boho apartment on the Upper West Side. The group published anthologies of their work at the end of each year, attended poetry readings en masse, and held readings of their own work in libraries and parks for parents and friends. Writing poems and workshopping them within the group gave them a space in which to explore not just image and metaphor, but also what felt dangerous and aching and sweet in their young lives. 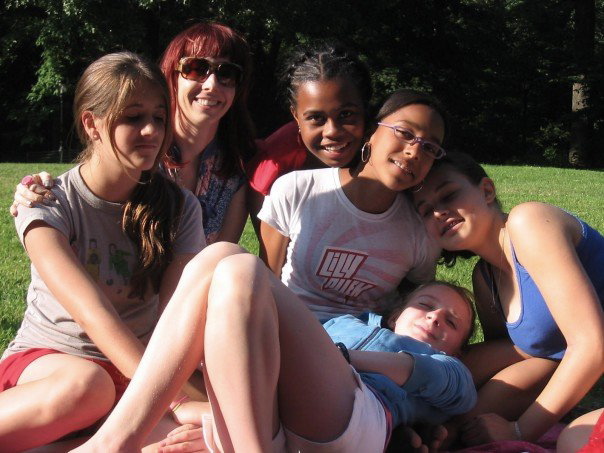 My daughter explained that their teacher, the luminous Jocelyn Casey-Whiteman, her tiny frame punctuated by clunky Doc Martens and candy red hair, had told them that when it came to their poetry, "Never apologize, never explain." That simple agreement made it possible for them to write from deep within themselves, and we, their parents, were encouraged to simply accept the poems they shared, no matter how dark, finding clues to our daughters, but sharing in the agreement never to limit what they wished to explore and bring to light.

It helped that they had each other. We knew always that they had each other, a first line of defense against the sorrows of adolescence. They could say anything to one another, and they did. I believe now that being able to test drive their more troubling emotions with one another made them more willing to share their hearts with us, too. The photo is of the Writers Workshop group, sans one member, during a reading they held in Central Park the summer after seventh grade. My girl is in the Lily Allen tee shirt and purple-framed glasses. Oh, the memories.