First day back at work. My defenses must be shot because the things I am usually fairly inured to are strumming my last nerve. Pet peeve:

Coworkers who complain about all they have to do when in fact almost everyone around them has as much to get done, and one who can't let go of how the writer of a story in the last issue acted like such a prima donna and wanted to re-edit the edit of her story and she's still so pissed about that and she's going to talk to someone up high about how that went down. I just want to scream get over it. Some writers are prima donnas. Some editors are too.

Well, don't I sound put upon today? Compounding matters is the fact that I am in denial that I am back at work on the second day of the year 2013 and how on earth did we get to 2013 already?

Had a nice little break though. And yesterday, twenty seven of us sat shoulder to shoulder around three tables joined end to end for a New Year's day meal. At one end were the young people, at the other end were the older folks, and it felt like a communion of souls, all of us happy to be welcomed at that table among generations of old and new friends.

Happy New Year, my friends. Or as Ms. Moon might say, Happy Wednesday. 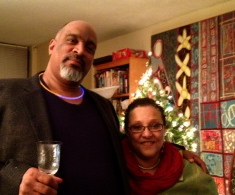