Yesterday my daughter and I did one of our city wanders, stopping in a cafe and talking for a long time over almond cappuccinos and apple tarte tartins, watching twilight become night on the Upper West Side, releasing the days upon days of being social into the undemanding comfort of each other's company, laughing, reflecting, being. Then we decided to go and see Silver Linings Playbook, but got to the multiplex early and slipped in to see the start of Zero Dark Thirty while we waited. They are two such different movies. They almost don't exist in the same universe. We had planned to go back and see the end of Zero Dark Thirty (a very dark tale), but were in such a good mood after Silver Linings Playbook (with its circle of misfits who find one another and the idea that there is someone out there who will love you just as you are) that we decided to save the extreme interrogation history lesson for another day. We left the movie theater around ten p.m. and stopped in at the gourmet market across the street, stocking up on berries and panini fixings and a couple of fancy items never seen in our neighborhood stores. 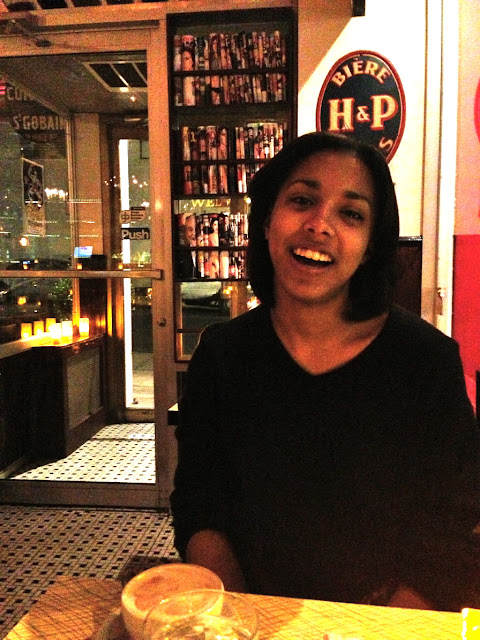 Back home, my husband had finished watching the NFL playoff games and was painstakingly unwinding the lights on the Christmas tree. He had made a hearty soup of lentils and leftovers, which we tucked into gratefully. Then my girl and I watched Downton Abbey, then the season two premiere of Girls, and finally continued with Prison Break, the Netflix series in which we are currently engrossed. By the end of the evening we had watched just about every film genre other than sci fi. Throughout we chatted about life things with my husband, who was busy packing up the Christmas tree lights and decorations for another year. It was an animated and free-ranging conversation, roaming from my husband recounting Supreme Court Justice Sonia Sotomayor's observations about affirmative action shared on 60 Minutes that evening, to comparing our childhoods in the islands and first jobs, to laughing over the story of how we met, prodded for new details by our daughter, who has apparently grown up enough to find the story of her parents meeting to be quirky and interesting, no doubt because she now has a meet-cute story of her own. We did miss seeing the Golden Globes, which I gather were more entertaining than usual with Tina Fey and Amy Poehler spot-on as cohosts. I also gather that Homeland took home top honors in the TV drama and acting categories, despite the implausibilities that people grumbled about in the last few episodes of season two. I was glad for the cast, who really did act their hearts out all season long. The photo here isn't great, it's poorly exposed and grainy but who cares, because the girl is beloved and the day was enchanted.