Tomorrow is my mom's 91st birthday. And I am not there. I want to be with her, but I also seem to be straightjacketed by a kind of inertia, a mystifying inability to make the decision, book the flight, pack a weekend bag, go to the airport, get there. I get stopped by the money, even though I tell myself it's only money, and money can't compare to being in the company of your mother on her 91st birthday. But the truth is, I don't have the money. And then I think about the layoffs coming at my job, "the largest in memory" according to the newspaper article that reported on it a week ago, causing a flurry of forwarded emails in the office and nervous speculation in corners. I worry about being away from my post when the pink slips rain down. But really, would visiting my mother be the deal breaker, the thing that caused them to fire me? I'm either already on that list or I've escaped one more time. Taking time off the go see my mother has no bearing. And yet here I am, the day before her birthday, and clearly I won't be there. I will be here, feeling guilty and castigating myself for not moving the little anthills that needed moving in order for me to get there. And she will be in her chair, looking out at the hills and making excuses for me. And all of it just makes me want to put my head down on my desk and curse my inertia and lack of imagination and cry.

Let me say instead I loved President Obama's inauguration speech, especially his invoking Seneca Falls, Selma and Stonewall, and all that signified about where he is putting his attention in his second term. We watched the pomp and ceremony from our living room with friends, over tea and three kinds of scones that my husband made: vanilla raisin, parmesan shallot, and cheddar jalapeno. I watched all day into the evening, even after our friends left and my husband had gone in to bed. I watched the Obamas dance and sing to each other, the First Lady resplendent in red, the President gallant and more comfortable in her arms than at any other point during that day, and then they exited stage left, their obligations discharged, finally able to go home and really celebrate with the family, and each other, before the new day dawned, and it was just business as usual, with the red-staters chiming no at every turn, and the second term president finally understanding that they will not work with him, they will never work with him, he will need to work around them. I like the new set of his jaw. 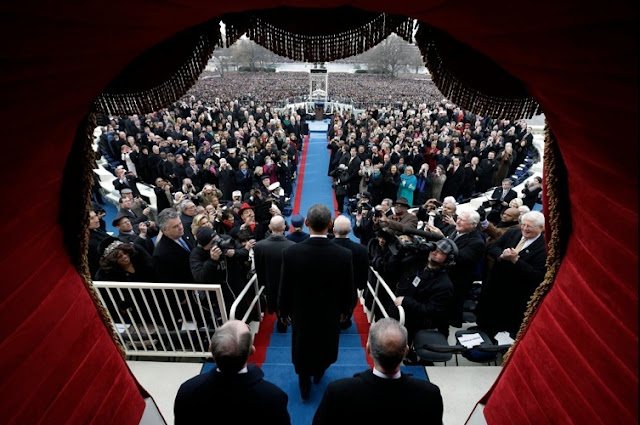