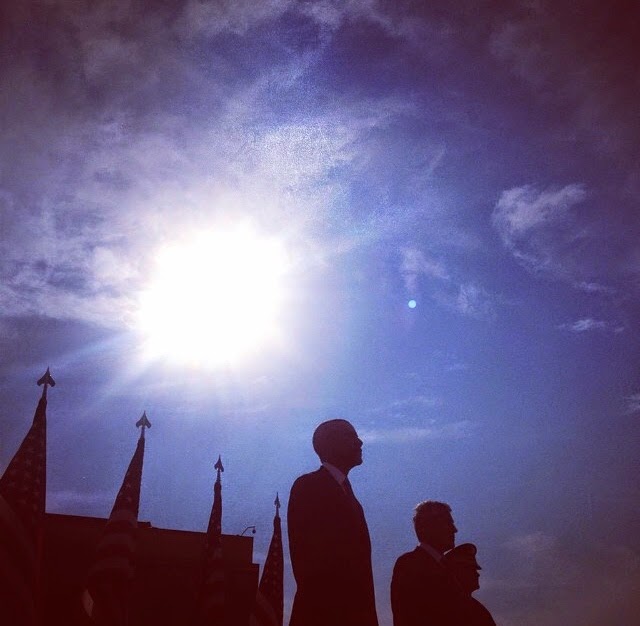 The photo, by Pete Souza, is of our president at the 9/11 memorial at the Pentagon this morning. In remembrance of that terrible day, I'm reposting this post from 2011.

When my daughter was in kindergarten in 2000, their teacher often took them on fields trips to the farmer's market in Union Square; she was teaching them about sustainability in preparation for their first farm trip in second grade. One of my daughter's classmates lived a block from the farmer's market, and the class often went to his house for lunch after their outing. His family's apartment had a roof deck from which the World Trade Towers looked close enough to touch, with nothing obstructing the view. The kids were also studying the city that year, so after lunch they would go up on the roof and choose a view to render in a drawing, which would become part of their city portfolio.

My daughter and many of the kids were captivated by the view of those towers. They drew picture after picture, with the weather and the light around the towers changing according to the day. As my daughter later put it in an essay she wrote in seventh grade, "Those two secure structures had to remain in the sky forever, they were glued to the sky. Without them, the sky would be lonesome, even with hundreds of other skyscrapers." All that to say, the Twin Towers were very much a part of her consciousness when, more than a year before September 11, 2001 on an otherwise unremarkable Saturday morning, she sat on her bedroom floor in a fit of 5-year-old intensity and made this drawing. 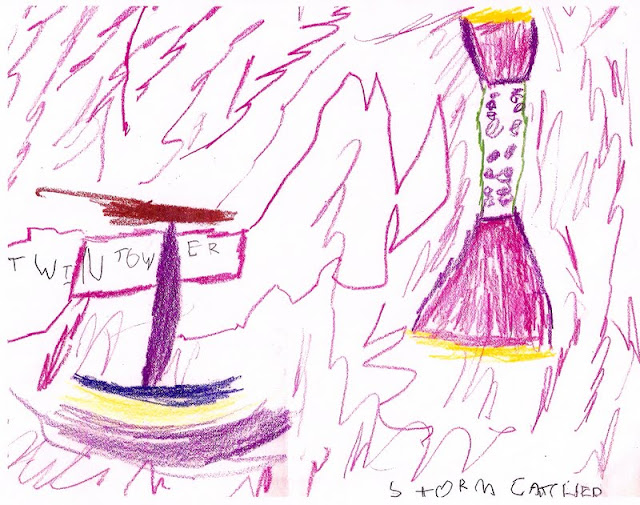 The story she wrote to accompany it went like this: "There were storms everywhere in the whole wide world even in China and New York even in heaven and in outer space. The twin towers were going to fall down but the storm catcher catched all of the storms even from China and New York and then the world was safe for all the people and the animals."

Every year on 9/11, I think about the people who lost loved ones in the fires and the ash and the rubble, and I wonder how it is for them now. I think about the woman my daughter and I had lunch with last May, whom we met on a college tour, who shared that her husband had died in the towers. It is a fact of her life now, and I felt she graced us by sharing who he had been and what he meant to her. Still, I will never truly know how life changed for her, and what it must be like to relive her private grief so publicly on this day every year. I do know, though, that in definable ways we were all changed. I am thinking this year about the looks on my children's faces in the aftermath, their confusion and disbelief, the dawning sense of not being secure.

My son, too, was deeply affected by 9/11, although he didn't make the connections at first. He was 9 at the time, and he sat beside me morning and night as I devoured every scrap of news from our TV screen. People said it was unhealthy to let children watch the coverage, but I could see my son was seeking answers to internal questions he began asking himself that day. His thirst for details reminded me of my own, and I let him watch.

What moved him most of all were the firefighters. I remember him coming to me at one point that evening and saying solemnly, "A lot of heroes died today." He kept trying to fathom the kind of bravery, the sheer heart it took to run into a burning tower to save people you did not know. From that day on, he has wanted to be a first responder. Initially, his goal was to become a firefighter, an ambition that lasted until he got to college. He has now changed his major to pre med. He collects every first responder certification he can and plans to train as an emergency medical technician this year. He has finally articulated his goal of being able to perform at the forefront of any emergency, saving lives.

Sadly, the fear we live with now has made us watchful and narrow-eyed. Politicians use that fear as a weapon, inflaming us, moving us further along a continuum of hate. It is why every year on this day I think about that drawing my daughter made and the story she told. I think my child sensed a potential future, it came to her from who knows where, and she held out for a more hopeful outcome. As our world seeks to heal from the events of that day and all the days after, may my son never need to run into a burning building, and may the storm catcher my 5-year-old invoked catch all our present and future storms. 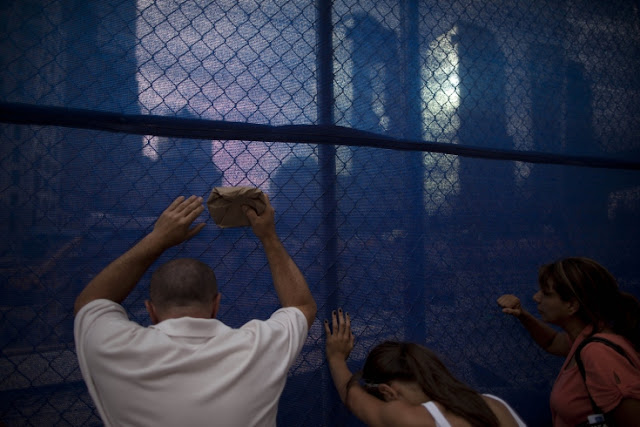