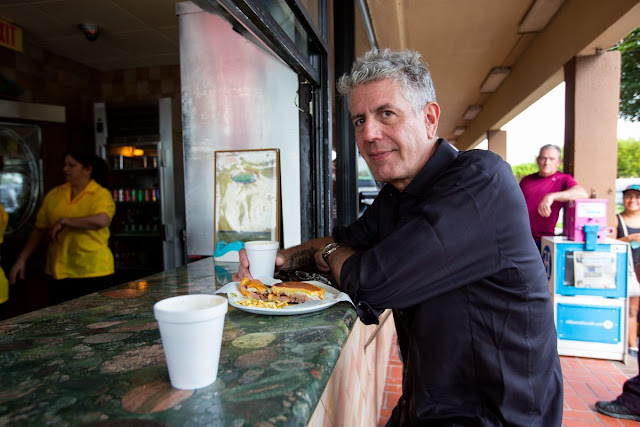 "Travel isn’t always pretty. It isn’t always comfortable. Sometimes it hurts, it even breaks your heart. But that’s okay. The journey changes you; it should change you... You take something with you. Hopefully, you leave something good behind.”  —Anthony Bourdain

To me, Anthony Bourdain always looked as if he'd just woken up from a bender. I read that story in the craggy map of his face, his eyes melancholy and much too aware, even when he was laughing. Later, he told us he had in fact been on many benders, he struggled to leave heroin behind, he kept cooking, traveling, weathering the electric shocks of simply being alive in the body he was in. I loved that he sought out people on the fringes, learning their food and eating with them, making us see their lives. I thought, naively, that he was gentling into middle age, growing into a sensibility that felt life too keenly, that couldn't shake off the jangle of the world. Last night, he took his own life. Fellow chef Eric Ripert, who was filming an episode for Bourdain's CNN show, Parts Unknown, found him unresponsive in his hotel room in France. With his death coming so soon after designer Kate Spade took her life two days ago, I feel pummeled. We look at people who seem to have everything they might dream, and we have no idea of their demons. Best to be kind, because we cannot know. I will miss you, traveler, and the way you lit up the corners.