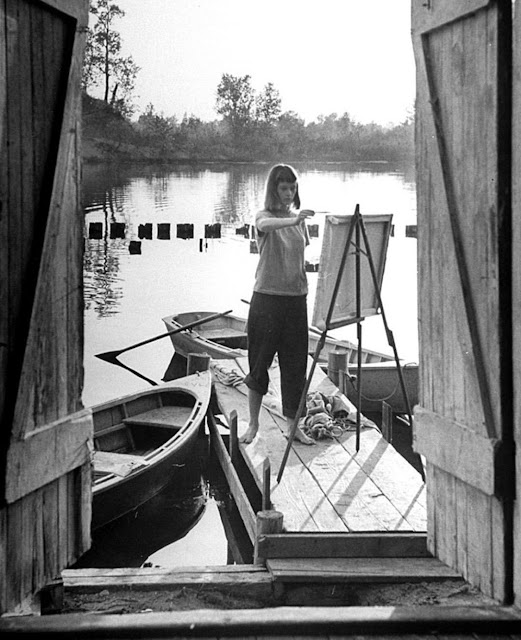 A young woman standing on a dock painting at the Saugatuck Art School during the summer of 1946. Photo by Wallace Kirkland, LIFE Picture Collection/Getty Image

As a kid growing up in Jamaica, I dreamed of being an artist. I always knew I'd move north to America, where my beloved and utterly cool Aunt Winnie lived. I visited her in New York with my family when I was five, and from that point on my future was set.

Color the girl in that LIFE magazine photo a shade of brown, add a few pounds and a fuzzy 'fro, and you have the exact picture I had of my future. I applied to college in New York City and started out as an art major, but then I ran into an English professor named Maire Kurrick, and a creative writing professor named Elizabeth Hardwick, and these women inspired and encouraged me, and soon I had switched my major to English with a concentration in creative writing, and my old fantasy dissolved into to a new one.

Though I dreamed of the purity of writing books, I went into journalism, because I was the child of a civil servant, who had instilled in me, above all, to make a living, earn my own income and make my own way. There was no security to be found in sitting alone in a room and writing in the hope that someone would like what I had written and publish it. No, one had to have a job, and a steady paycheck. And the only way I could think to do that in the field of writing was to pursue journalism.

And so I went to graduate school in journalism, and became a reporter for the recently relaunched LIFE magazine in the 'eighties. Working for LIFE had been a secondary dream of mine when I was a girl poring over its photo essays, a new form of journalism. I studied the names and styles of the magazine's celebrated roster of photographers, imagining what it might be like to drop into people's lives in far-flung places to document their stories. I ended up working with some of those same men and women who had been on the old LIFE masthead, and I wouldn't trade the experience for anything. I suppose, in a way, that first foray into journalism was a perfect melding of the visual with the written word.

But now, here I am, a woman who sits alone in an apartment all day, writing books. Life has shown me again and again that the dreams we hold close are always in the process of being manifested. And now, I am beginning to dream again of returning to that first love, painting on canvasses, because while I do love and am grateful to make a living writing books, I am so often filled with agita at the need to please other people, while painting settles into my solitary soul as a feeling of comfort and peace.