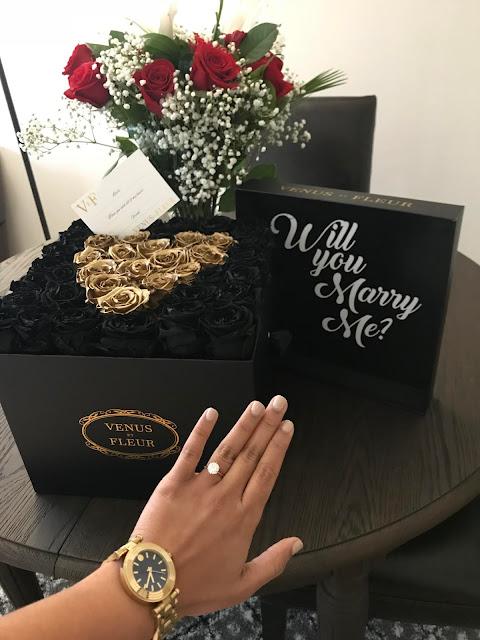 My darling niece is engaged! Her sweetheart popped the question last night! And oh, he did it beautifully. It was the third anniversary of their relationship and he took her out to dinner at their special place. But before they went, he presented her with this box of fragrant golden roses in the shape of a heart, and then the ring, and she burst into to tears. "So is that a yes?" he said and she nodded wordlessly. "Um, I'm gonna need to hear you say it," he said, and she laughed and cried and said it.

We were all on standby. We'd known from the night before that this was the day he would propose. On Monday my husband was home from work, and our son came over to hang out with us on his day off, and my daughter also happened to be off from work that day and she came over with a bottle of champagne and told us to gather round. "Leisa is getting engaged tomorrow. And Grant wants us all to be at their apartment for 9:30 PM to surprise Leisa when they come back from dinner and to raise a toast and celebrate." And so we were there, along with some of their other friends, and his parents, and my lovely niece dissolved again into tears when she came through the door and we all yelled, "Surprise!" even though there had been a firm plan to yell "Congratulations!"

There was so much love and joy in the room, so much laughter and communion, and I looked at all the young people there, the couples, and I thought that they will be each other's support system as the years go by, and I just felt so thankful that my son and daughter and niece were able to grow up like siblings, and that they are all with really good people right now, and maybe this is how it will be. Well, the first of these couples has declared, and we will be going to Jamaica for a wedding in the near future, maybe a year from now, and it will be beautiful.

We found out that Grant had called Leisa's mom in Jamaica the night before he proposed, and he'd talked to my brother about his intention to ask Leisa to marry him when my brother visited us in New York a few weeks ago. We had been drinking margaritas that night, and apparently my brother's response was, "I have two pieces of advice to give you: One, be patient, the good times will come and go, but if you're patient and have faith they'll always come again, and the other, well, I can't remember the other thing right now, I'll need to get back to you on that." Sounds like my brother.

On the way back home in the car at close to midnight, my daughter and her love dozing in the back seat, I reflected on how mixed that day had been for the world, with the Supreme Court upholding the Muslim ban, and a federal judge ruling that the children stolen by our government had to be reunited with their parents within 30 days, and primaries across the country, including in New York where a 28-year-old Puerto Rican educator pulled off an exhilarating upset victory over a 20-year incumbent who was next up to be Speaker of the House.

The world was definitely still roiling, with very real problems that we would continue to confront, but for this night, we were in a bubble of happiness, the rest of it not quite real, almost a parallel universe that was waiting for our return, but on this night, we got to exist in a week where my darling niece completed her year-long residency, signed a contract to work as an associate dentist at a practice in Brooklyn, and got engaged to be married. These are the moments that fortify us.

This morning, I'm remembering my niece texting me in the summer of 2015 to say, "I met someone." There was something about this one; I could tell right away. Congrats, my loves. I've watched your joy and ease with each other from the very beginning, and I'm so very happy for you both! 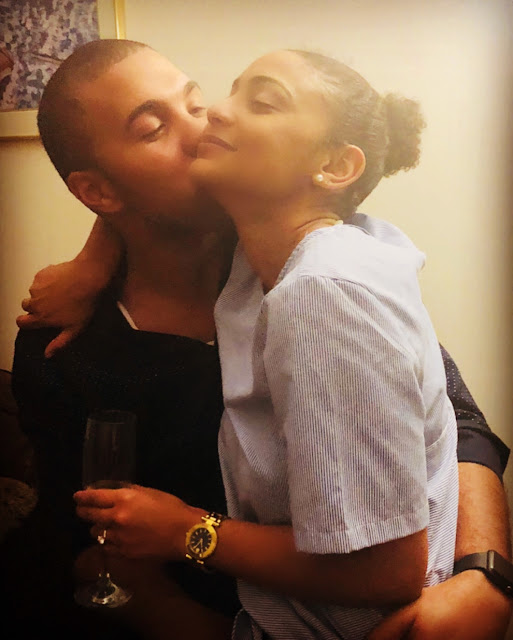