Where are the babies?

Octavia Butler wrote these words in Parable of the Talents, the second of her brilliant Earthseed series, about a dystopian nation in which a religious zealot is elected president, emboldening his followers to kill people of other religions, as well as anyone they simply don't like. The fictional president's campaign slogan? Make America Great Again. You can't make this up, unless of course you are as prescient as Octavia Butler.

I sat in my living room this morning, listening to the news, listening to the lies being spewed by Trump administration officials, who are holding brown children ransom as leverage to get the Democrats to fund Trump's unholy wall. The newscasters played a tape of children crying as they were torn from their parents' arms. They reported on a Texas detention officer arrested and charged with "super aggravated sexual assault" of the 4-year old daughter of an undocumented mother. They interviewed sobbing parents who had been forcibly separated from their children. And suddenly my own tears were flowing, and my heart felt as it might bolt out my chest, I just couldn't contain the nightmare.

I had been awake since 4 A.M., venting on Twitter, howling into the void, furiously attaching #TrumpConcentrationCamps to every tweet and retweet, trying to do my part to get the hashtag to trend. For a while this morning, it did. I can't explain to you how boggled I am that this state sponsored abduction of children is actually happening. Sometimes, I think I must be hallucinating, because how on earth? And where are the girls who have been kidnapped by the government? How do we know they are not being trafficked? Where are the babies? How do we know they are not being sold into adoption to the highest bidder? We don't know. Those in charge of this policy can't answer these basic questions when reporters pose them, so what faith can we have in the safety and protection of these unseen children?

Some flight attendants reported that a group of children in cheap black and gray Walmart sweatsuits were flown on the redeye from Arizona to Miami a couple days ago, 16 children ranging in age from 6 to 11, all of them terrified, some of them weeping, a little 6 year old girl holding onto a flight attendant who had been kind to her, as the children's adult escorts scowled. At one point this morning I tweeted this: 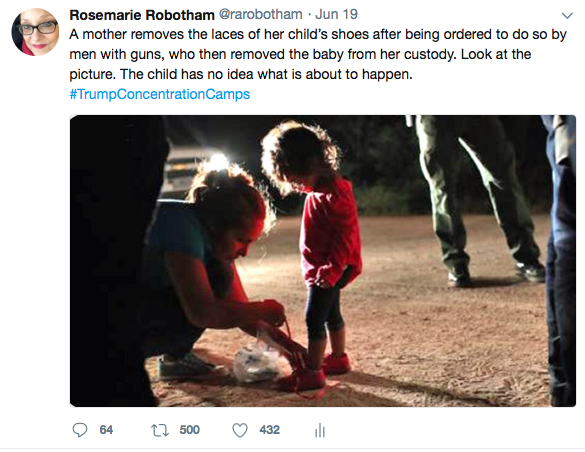 I was undone just now to read this response: