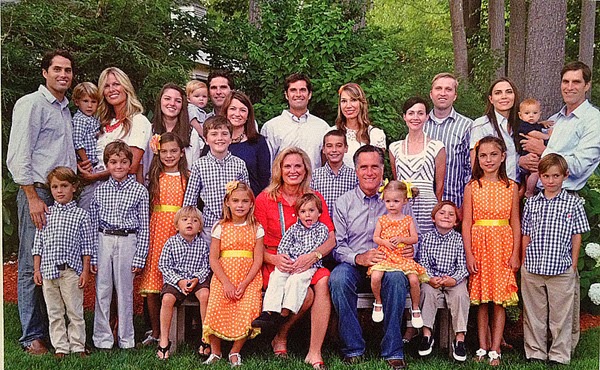 I watched Mitt, the documentary of Mitt Romney's two failed presidential campaigns last night. It was released on Netflix on Friday and has probably been streamed millions of times already. I think we're watching the birth of a major network in Netflix; they've been making very canny business choices. But back to Mitt. His family is straight out of All American central casting, and the camera focuses in on them closely, and not much else. This almost total lack of any policy debate or analysis of issues makes for a film that is less about who Mitt Romney the candidate might have been as president, and more about how a family handles the pressure cooker of life on the road and the vampire glare of the media that is modern presidential campaigning. Throughout, you get the feeling that certain members of the family will be deeply relieved if Mitt doesn't win, though of course everyone will be disappointed. Mitt himself appears the most realistic of them all, trying to moderate everyone's expectations. It is a soul crushing dance, but he's got his wealth and his family to cushion the fall we all know is coming.

There are moments when the sense of superiority and contempt he revealed at certain points on the campaign trail peek out—when he's discussing debate format with a producer, for example—but for the most part, he's a genial husband, father, and grandfather in filmmaker Greg Whiteley's uncritical lens, and the documentary goes a long way to rehabbing his image. There's a moment when he talks about his admiration for his father, and the climb he made from humble beginnings to head of an auto company and governor of Michigan. You wonder if Mitt is still trying to live up to good old dad, and maybe shouldn't have been in politics at all. But what struck me most forcefully two-thirds of the way through was the utter lack of diversity in Mitt Romney's world. I was going along with the treacly family portrait, my analytical brain mostly disengaged, when I suddenly thought: Wait a minute, this isn't an episode of The Waltons, just rich and Mormon; this is about a man who wanted to be president, and he appears to know nothing at all about the daily struggles of most of us, and worse, seems not to know he doesn't know—or doesn't care.

The documentary ends up being little more than voyeuristic reality TV, and it confirms the impression I had formed of the man when he was running. Maybe he'd be a good enough president for his own class of business titans, and wouldn't we all like to be that safe and privileged, but we're not, which makes his lack of interest in and possible contempt for my family a very scary proposition. I'm glad he didn't win.

Update two days later: I keep thinking about the documentary, and about the fact that candidates throw themselves into such a race, and what an extraordinary act of courage and will and crazy hope it is to subject oneself to all that comes on the campaign trail. Curiously, that is the part of the film that has stayed with me, that all the candidates, even those whose politics I deeply reject, deserve some measure of admiration for putting themselves out there. The game is brutal.