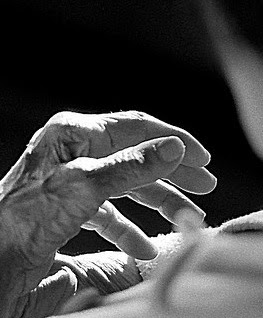 Last night at about 9 p.m., my aunt's home attendant called and said my aunt was refusing to get up from the sofa in the living room to get ready for bed. She said every time she approached her and tried to take her arm to help her up, my aunt would flail and fight and tell her, "Don't touch me." And then she would continue to just sit, staring into to space, into who knows what thought pictures were inhabiting that space. The home attendant asked if I could come over there and help because she didn't know what else to do. I asked my husband to come with me. My aunt feels very safe and grounded in his presence. We went across the courtyard to her apartment, and there she was, still on the couch, looking very small and hunched and bewildered.

She gazed at us when we walked in, as if taking a moment to understand who we were and then she smiled fleetingly. We sat on either side of her and asked her how she was doing and just generally chatted with her. We can no longer grasp a single thread of what she is saying, but we knew she was engaging with us in conversation just the same. At one point she was trying to tell us something, and we just listened and wished we could fathom what it was, because it seemed to her important. Eventually we asked if she was ready for bed and she nodded. My husband helped her to stand, holding both her hands while I got the wheelchair and pushed it next to her. But my aunt just stood for a while, unwilling or unable to make her feet do her bidding to turn her body so she could lower herself into the wheelchair, and after a while she just sat back down on the couch.

The home attendant sat on the other side of the room, shaking her head in frustration. She doesn't have the patience of the home attendant who comes on the weekends. This woman, though well-meaning and really very funny, is more brusque, wanting to get things over with. My aunt has a visceral negative response to that. It makes her want to resist with all the force she can marshal, which is still a lot.

My aunt seemed agitated when she sat back down. I stroked her hair, which always seems to calm her. And then I had the idea of offering her money to put in her pocket, since she is fixated on her finances above all else, having once run the Office Services department at Barnard College, and having had to dole out money to her two children for one thing or another her whole life long. Now that her daughter, the addict, is no longer in the house, money lasts a long time, as my aunt's needs are few. But she likes to have a few dollars in her pocket to give to her great grandsons when they visit, or to her grand nieces and nephews. When I pulled out three twenties and handed them to her, she brightened at once. I suspect she felt as if she now had some agency. And sure enough once the bills were safely tucked into the pocket of her dress, she began pushing herself forward to the front edge of the couch as if to stand. This time when my husband helped her up, she did her little shuffle to turn herself around to sit in the wheelchair and I wheeled her into her bedroom, where the home attendant took over.

Once she was ready for bed, we kissed her and she looked at us intently, trying again to tell us something. It seemed to be a story of a time long past, and we nodded and murmured to her and found a break in the unintelligible sounds she was making to say our good nights. As we walked back home I was thinking how very lonely it must be to be so trapped inside yourself, the memory still vivid of when you were powerful and in charge, but now you are dependent on the patience and humor of paid caregivers, waiting for the arrival of relatives who might or might not happen by that day, and who even when they do come, leave much too soon and never really change a thing.
Posted by 37paddington at 1:38 PM