My son is not feeling well tonight. Dinner didn't agree with him. He lay on the couch feeling nauseous, which worried me because he goes back to college in the morning. Classes won't start for another two weeks but he has indoor track meets this week and next, and needs to be up to par. And you hate to send your children from your home when they are not well. You want them right there, under your care. He's going to be staying in the track and field house and not in his dorm room until classes start, which means he'll be roughing it, living out of a suitcase, sleeping on a couch. I don't want him feeling unwell. He's finally gotten rid of the cough he came home with at the end of last semester. If he's leaving me tomorrow, I want him perfect.

He hasn't packed yet. He hadn't done laundry either, but he managed to get his sister to agree to do it for him—for a price. I heard them negotiating and they settled out at fifteen dollars. My girl has a little cottage industry going there.

The thing is, she has a midterm paper to write for history, which is her hardest class, but one she finds very exciting because the teacher is so engaged. "Mom, he is a genius," she told me in that absolute 16-year-old way. (I could hear the exclamation points and I could kind of hear the f-word she didn't include to qualify genius.) She hates the hours of history homework she gets every night, but she looks forward to the classes, knowing she will be challenged, provoked, entertained.

The intel is that her history teacher is a very hard grader. The twelfth graders who had him last year told her, "By the end of the year you will adore him, but don't expect any As." Still, she wants to do well, and maybe she is hitting her stride because she got a perfect score on the last test. But now she is trying to write her midterm paper while doing her brother's laundry on Sunday night, and it is due in the morning. "Mom, I've got this," she keeps telling me when I try to shoo her back to her computer. She won't even tell me what the paper is about, because she says, "You'll just keep asking me questions and freaking out. I've got this." No doubt she does.

Or maybe this paper won't be her best work given the distracted last minute conditions under which she is working. But I have to keep things in perspective. It could be that tonight, her care for her brother might take precedence. Close to midnight, thinking it would make him feel better, he went to take a shower, and after he dressed, he went into his sister's room and lay down on her bed. She was cross-legged on the floor, tapping away on her laptop, and he decided to keep her company. But very soon, he fell asleep. The next time I looked in on them, she was putting the comforter over him, tucking the pillow under his head. I just stood at the door and watched her taking care of him and then she came over to me and hugged me, looping her arms around me in the way she does. She is a healer that one. When you are near her, you feel calm and loved and healed. My eyes just filled with tears as I wrote that.

Seeing her with her brother tonight made me remember another night back when she was two years old and her brother was four. He had misbehaved in some way that must have seemed very extreme at the time, though I can't remember what it was anymore. His dad had got down on his level, face to face, and spoken to him very sternly, wanting him to understand that whatever it was he'd done was seriously not acceptable.

We decided to give him dinner and put him to bed early instead of a time out, as it was already evening. He was not pleased. Both kids were sharing a room then, my son in the top bunk, my daughter below, and she sat in the middle of the room holding a stuffed toy and looking up at her brother as he sobbed in fury and sorrow and protest. Eventually he cried himself to sleep.

When I came in a short while later to get my little girl ready for bed, this is what I saw: She had climbed with her two-year-old legs up the ladder to the top bunk. She had tugged and pulled a pillow bigger than she was under her brother's head. She had carefully covered him with his blanket, and she had put the stuffed animal against his cheek. And she had fallen asleep up on top of the covers, curled up next to her brother. I went quietly out the room and called my husband to see them.

These children. They swell my heart. 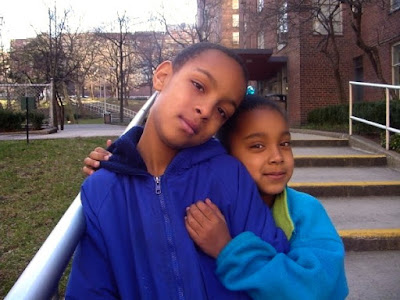