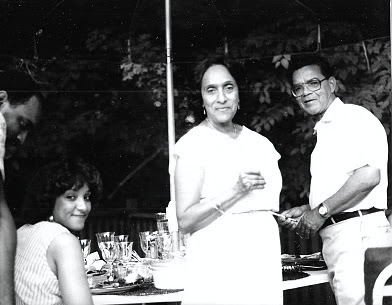 My mom is 89 years old today. There she is above, all elegance and grace, my father teasingly poking her with a pen. She is not deterred. She will maintain decorum until the shutter clicks, and then we will all crack up laughing. That's my husband and me on the far left, a week after we were married. Has it really been twenty-five years? Next month, my dad will have been gone for fifteen years. You can see his mischief here. He was a brilliant mind, a judge whose decisions made the most compelling reading. My mother was his editor, the one who made sure he didn't descend into legal mumbo jumbo, that his writing remained riveting and true as clear glass. They were partners in every sense. He became a sir, knighted by the Queen of England at Buckingham Palace for the measure of his work. I was there when he knelt and she laid the sword on his shoulder. That made my mom officially a Lady, which she had always been anyway, just ask her sisters.

It was a rare and hallowed thing to be raised by these two. I grasp that fully now. Oh we had our days of rain, our shadows. But there was love throughout. There was always so much love. I remember my father in his final weeks, flirting shamelessly with my mother on the last of her birthdays that he would witness. They giggled as he slipped his hand along her soft arm, a secret joke blooming between them. When I opened my eyes this morning, I could see so clearly the way my father's eyes danced when they alighted on my mother that afternoon. He was in a hospital bed in St. Lucia. She was in a cool blue linen dress, worry lines around her mouth, yet she couldn't help laughing as he flirted, and when she laughed she was radiant. They had been married forty-seven years but he was still just a boy who couldn't believe his good fortune in spending his life with this girl.

Happy birthday, Lady Gloria. I know you still miss him more than you can bear to say. But take your time here. Don't rush away. Somewhere he is waiting for you. He knows, as we do, you are beyond compare.
Posted by 37paddington at 6:52 PM