Sarah Palin needs to take responsibility for posting the map that marked home districts and named the members of Congress who voted for health care with bullseyes shaped like the cross-hairs of a gun sight. Today, her violent incitement came to pass with the shooting in Arizona of Democratic Congresswoman Gabrielle Giffords, and the killing of six others, including a federal judge and a 9-year-old who were standing in her audience outside a grocery store in Tucson. Just a regular Saturday morning torn apart by gunshots. Thirteen more were wounded by the fire and a young man described as "a fringe character" was arrested. Hate is ugly. And today it was deadly, too. 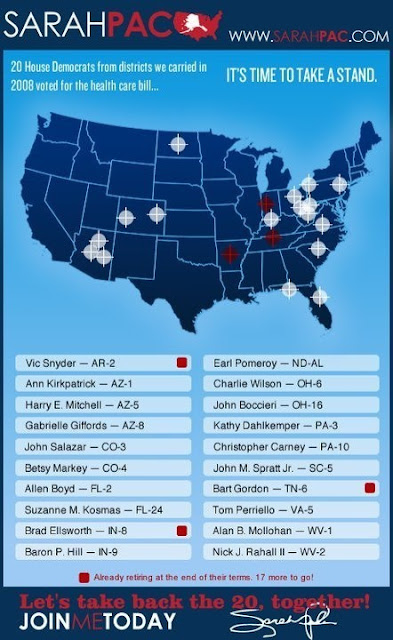 There it is, the fateful map with Palin's signature for good measure, like marching orders. And there is Congresswoman Gabrielle Giffords' name, four down on the left. The woman was shot point blank in the head while at a meet-and-greet this morning. She is now fighting for her life, while the right wing disavows any part in her shooting. They forget the rhetoric of hate and the crescendo of fear they have recently conducted like a doomsday symphony. What in hell did Palin and Beck and the Tea Party and Limbaugh and Boehner and the rest of that chorus expect?


-------------------
Update on Sunday morning: News reports are that Congresswoman Giffords is responsive and "able to communicate" nonverbally.

An aide for Sarah Palin issued a statement saying her map had nothing to do with guns, it was all a big misunderstanding. Never mind Palin's earlier description of the map as her "bullseye list" and her tweet that said "Commonsense Conservatives & lovers of America: 'Don't Retreat, Instead - RELOAD!' Pls see my Facebook page." Her Facebook page was where her map was posted. As of today, it's still there.

It is emerging that the shooter was possibly an untreated schizophrenic, which as Radish King notes in the comments, circles back to the need for easily accessible health care for those who are mentally ill. This is who Sarah Palin's 'Reload!" mantra is most likely to incite to senseless violence. This is why we need to be more responsible in our public discourse.
And finally, the dead. Among them was an aide to Giffords who was engaged to be married. A federal judge who came by to say hello to the Congresswoman. And 9-year-old girl who had just been elected to her school's student council, whose neighbor brought her to meet Giffords because she thought it would inspire the bright third-grader who was interested in public service.
In a cruel irony, this little girl was born on September 11, 2001 and was featured in a book called Faces of Hope: Babies Born on 9/11. A short life bracketed by tragedy. Her name was Christina Taylor-Green. Her sweet face is below. 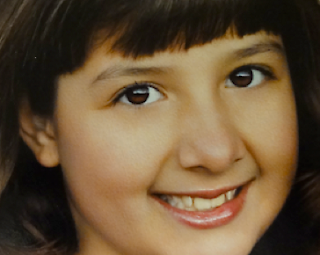