Yesterday I kept thinking about my mother's nine decades of life and all the places it had taken her, from the humble house on Little Kew Road that her father built, and in which she lived with my grandparents and her eight brothers and sisters, through her rural years in the Postal Service when she met my dad, to their student days as newlyweds in London when my dad was in law school, back to Jamaica where they raised their children, then to Antigua then St. Lucia, and even to a ceremonial room in a fabled palace when she thought she would burst from the pride she felt in her husband. She knew better than anyone what he had had to overcome to be there. She knew the intelligence and integrity of the man. She knew his silly side, his tender sentimental side, and she knew he could be riven with emotion and in those times she knew how to steady him. Having watched them, I mostly know that whatever dark nights might take hold of me, I will get to tomorrow. As my father did. She made sure. 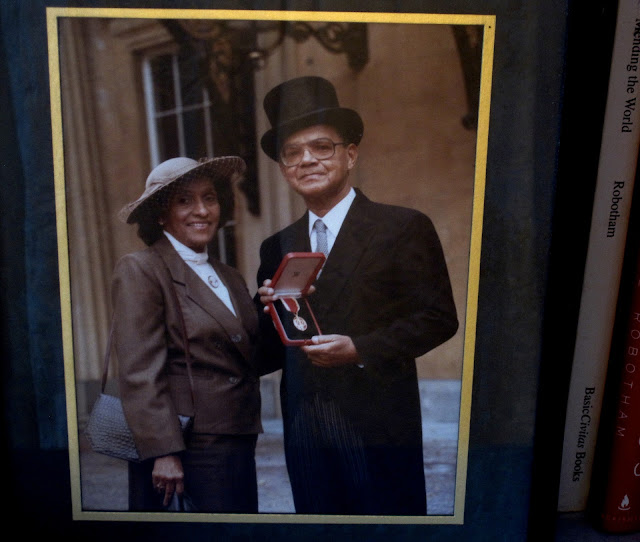 I went looking for a photo of the original four of us from the day in November 1987 when my dad was knighted by Queen Elizabeth herself, in a great room at Buckingham Palace, but after I unearthed the album I realized our scanner was broken, so I decided to just take a picture of the photo of my parents that is already in a frame, sitting on our bookshelf. Custom dictated that my dad wear top hat and tails, with trousers of a particular pinstripe. In our London hotel room the night before the ceremony, my brother and I laughed and played dress up in the rented attire, and my mom got misty when she looked at my dad and said, "I wish your mother were here to see this." 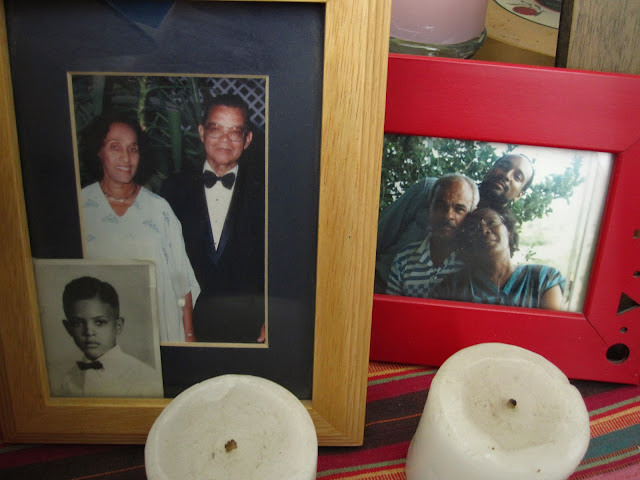 Since I was already taking pictures of pictures this morning (and of the snow, falling again outside), I snapped some frames in other corners too. On the left above are my parents on the occasion of my father's retirement in October 1991. I wasn't at the banquet as my son had just been born. The photo inserted in the edge of the frame is of my brother at age five. I like the matching bow ties. In the red frame at right is my husband with his parents during one of our visits to Antigua the year after we were married. All these mothers and fathers and firstborn sons, and the sons and daughters and their children not pictured. Strings of my heart, all.