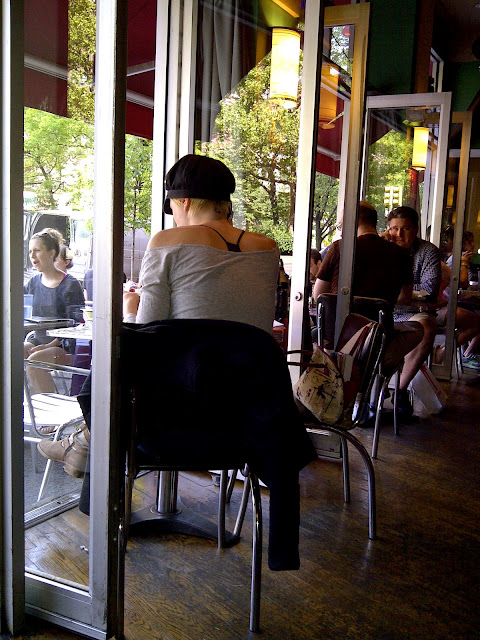 This was the view from where I sat with my friend, talking about the fact that already a whole year had passed since her ex-husband, the father of her son, took his own life. She reflected that it had taken her the entire year to feel her grief, that immediately after it happened she was so angry, and so scared for her son, and so overwhelmed with details of belongings and estate, that she couldn't focus on anything else she was experiencing. The heavy sorrow happened underground and now it is surfacing. Her son is doing well. He got into a great college. He is touring with his band this week and having an amazing time. We can all tell from the photos being posted on Facebook. He is happy. She secured him. She made sure he would be fine. And now it is her turn. Now we all have to make sure she will be fine, too. Because only now, on the eve of the Sunday when she got that anvil-to-the-gut call, is she becoming aware of her own pain. She has decided that she wants her friends around her on the anniversary, so next Tuesday, we will gather in the park and remember Jim and just be together, a family around her, loving her and her boy through this fact that can never be changed, through the grief that she has now welcomed in the door. It's necessary to welcome grief in the door and to sit with it for as long as it wants to be a guest, I think. Life continues in the spaces around it, prosaic and mundane, and sometimes, as with her son this week on his tour, exhilarating.